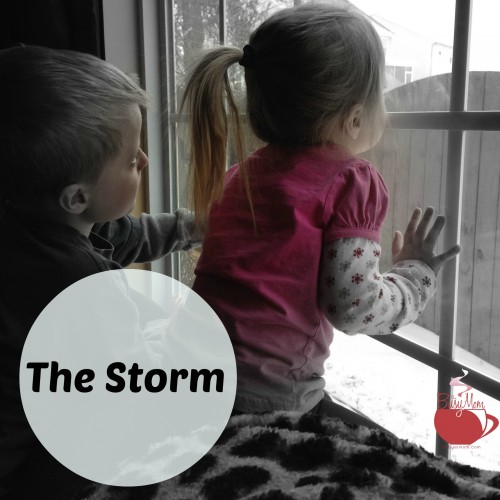 We have been trapped in the house for days. In South Carolina, it just doesn’t snow…. but this week it decided to start coming down… and didn’t stop for THREE days! After endless hours watching the forecast, we prepared as best as we could for the days ahead. Stores were emptied of the typical bread and milk, cars gassed, batteries stocked and we all bunkered down in our homes.

Isolated from the rest of the world as the storm approached.

As the days went on and the news kept running I learned that no matter how much you prepare, sometimes you just aren’t prepared for what life throws at you.

How similar was this past week with other situations in life? You may see something BIG coming at you. You brace yourself as best as you can… but sometimes, no matter how well we stock up or bunker down, we can’t escape life’s curveballs.

My Pastor once said that the first step the enemy loves to do during a moment in crisis is to isolate you. Make you feel alone. Separate yourself from the outside world so he can begin to whisper lies in your ear…

” No one will understand…”

” They will think I am not really a Christian if…”

But that’s exactly the opposite of what God’s word said.

That’s why Jesus stressed gathering together in prayer, in communion and in worship…

” LET US NOT STOP MEETING TOGETHER… BUT ENCOURAGING ONE ANOTHER…” HEBREWS 10:25

There is POWER in numbers and POWER in prayer.

Mom’s, life is TOUGH!! Sometimes we don’t even get a chance to get back up before we are knocked down again from another blow. Life has a way of hitting us from all sides… all at the same time But Jesus already knew that. And He knew that we couldn’t do this life alone!! We need each other. We need our love and prayers and smiles…When the days are good…

and when the storms come.

The greatest part about the storm is that Jesus already knows the ending. He wrote the story and although we may never know all the reasons the storms come, this side of heaven, we can rest asured knowing that Gods got this. Our job is to continue to pray, trust and hold on cause sometimes life is a wild ride…

“FOR I KNOW THE PLANS I HAVE FOR YOU ” DECLARES THE LORD, “PLANS TO PROSPER YOU AND NOT TO HARM YOU, PLANS TO GIVE YOU A HOPE AND A FUTURE.” JEREMIAH 29:11

God doesn’t make mistakes, nor does he forget about you. He is working behind the scenes.

By the third day of the snowstorm, many people were left without power. Pipes burst, cars fell into snowdrifts but eventually the snow stopped falling. We thought that day would never come. My children watched out the window as the glaze of ice reflected the sun. We still couldn’t leave the house. unplowed streets made travel too dangerous….

And then the sun began to shine. Its rays came through my window and we all OOHHED and AHHHED so relieved to see the one thing that would bring us freedom. By the next day the streets were dry and we loaded our van to venture out. We were giddy. Cabin fever got the best of us. Apparently everyone else in town had the same idea… but that’s ok. We didn’t care. It felt great to be free. It’s hard to believe that JUST yesterday our hope of warmth was gone. Our world was covered in ice… then POOF, it’s GONE!!

Our “storm” was over. Our circumstances changed quicker than we realized…. and now it is just a memory… We look back on those three days and can see the good in being trapped…. we may even think it wasn’t as bad as we thought….

Either way, we got through!

Like in life, this too shall pass. The Sun WILL shine again and you can venture on with a smile…. just hold on through the storm.

2 thoughts on “The Storm”