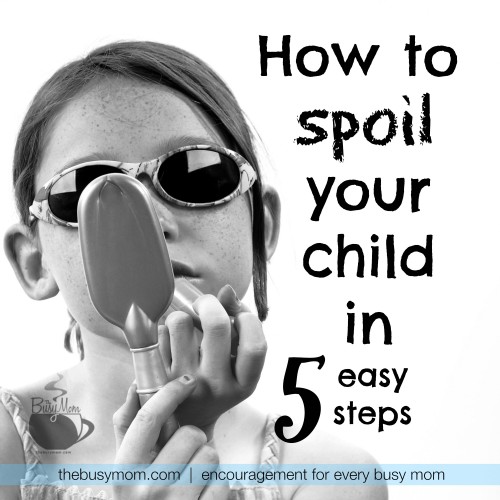 Twenty five years ago, I had a lot of theories about parenting. You know—because I was a kid once. Boom. Qualified.

These days, I have a lot more grace for new parents. Having raised two of our seven to adulthood, I have to say, I died on a lot of hills that really didn’t need to see a battle at all. I dug my heels in over stupid things like whether or not my children could watch Pokemon. True story. Moral? There really are things that we can fixate on that won’t matter much in the end.

Flipside? There are also things that definitely WILL matter. Mark my words. We’re living in a culture of over-indulgence. As parents, we’ve been duped into believing that our kids “need” a whole bunch of stuff that they don’t need at all. So if you want to spoil your kids, start here:

Hey. I’m not trying to sound like a mean mom—I love my kids to the moon and back. But I worry for our future as a nation when I see children who are overindulged and self-important. It’s becoming more and more rare to see a child disciplined for speaking disrespectfully to an adult or show up to an event sans smartphone. If we want a culture of self-absorbed, selfish and myopic adults, we’re well on our way unless we start to see those “old fashioned” values as timeless instead.

Be the parent. Your kids will thank you for it.