Yesterday, I was in a grocery store with my daughter. She was glancing at magazine covers as we unloaded our cart contents onto the conveyor belt. Aside from the usual gossip magazine covers, I noticed that several major magazines had lead stories about young people (and a few not-so-young people) who were making the most of their celebrity status—by behaving foolishly.

A magazine cover indicates a certain sort of honor, doesn’t it? That’s what my young daughter assumes.

Have you ever wondered why it’s important that we use wisdom in giving honor? You don’t have to look much farther than the newspaper and national media to figure out that we’re not exercising much discernment in bestowing honor these days. Here’s who we are currently elevating to “celebrity” status:

Athletes whose lives off the field are a wreck
Pastors who have a “following” but lack personal integrity
Reality TV personalities
Bloggers (hello!)
Actors
Musicians

Don’t get me wrong: I’m not saying that these people are not worth of honor. But honestly? It’s not hard to see we have a problem where honor is concerned in our culture. The Bible has a lot to say about the importance of bestowing honor.

As snow in summer, and as rain in harvest, so honor is not fitting for a fool.

In Romans 13:7, Paul instructs us to give honor to whom honor is due. When we honor people such as athletes simply based on their skill and ignore their personal lives, we do everyone a disservice. When we honor celebrities who clearly have huge moral deficits, what message are we sending to our children? 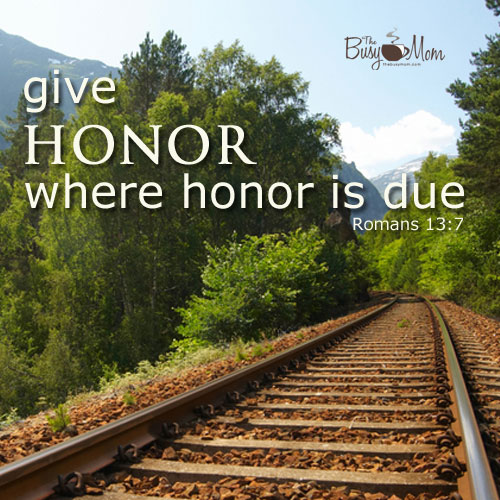 I believe the message is clear: we’re telling our kids that as long as they can produce something that other people want (like a winning touchdown), all bets regarding their behavior are off.  There’s no clear solution on the horizon, either. As a culture, we need to do a better job of honoring those to whom honor is due. Christian or not, behavior matters.

4 thoughts on “Teaching Our Kids About Honor”