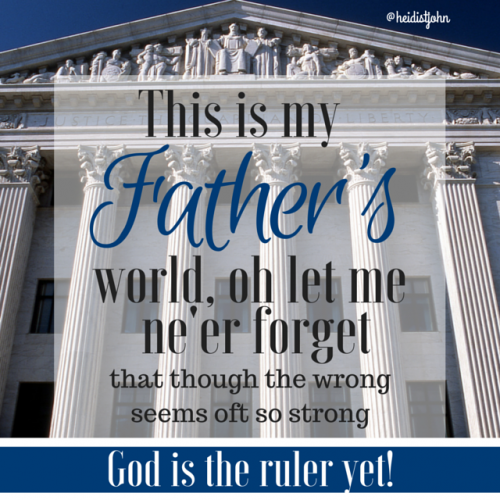 My heart hurts a little today. Not gonna lie. Turns out that God’s word is unpopular. I have gay friends. I love them. I’ve never said an unkind word to them. I’ve never been rude, disrespectful or the least bit “hateful.”

However, apparently my stance that God created marriage and that His word is authoritative and inerrant on all matters pertaining to life and death has made me hateful.  As such, I have become the target for some truly hateful comments. People have said they wished I would die, called me a bigot, said that their god is “disgusted” with me. Several posters questioned whether or not I should be allowed to keep my “indoctrinating” my own children.  “I hate you!” one woman yelled in a Facebook post, “You should not be allowed to live in this country!” Shortly after that, another woman said I was the “most ignorant, hateful person she had ever encountered.”

Really? Does she not get out much? If I’m the meanest person she has ever encountered she should meet some of my social media “followers.”

In a breath-taking departure from the rule of law, the Supreme Court has mandated a new moral code for you. So how do we…

A few days ago, when our president colored the White House with God’s rainbow in celebration of what God calls sin, my heart broke. Like many of you reading this, I felt I could barely breathe.  It was an affront to the millions of people in this nation whose very souls ached at the sight—but more importantly, it was an affront to God.

As I was being publicly mocked for “sheltering” my kids via homeschooling them, the US Department of Education changed their Facebook profile to celebrate what God calls sin. As I have said before, education is never, ever neutral. In Luke 6:40, the Bible teaches us that when a “student is fully trained, he will be like his teacher.” And now, if you dare to disagree with the state teaching your children their version of morality—get ready—you’ll be called hateful.  I can almost guarantee it.  This is the new “tolerance.” 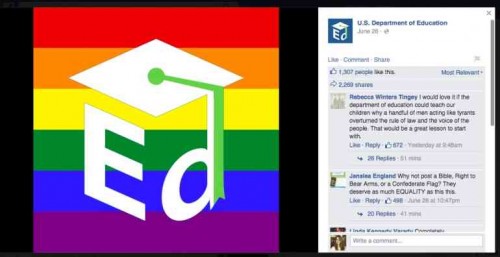 Listen. Can I just say again that I stand on the word of God? Shoot the messenger if you must, but one day, I’ll stand before the Lord and give an account of my life. I’m clinging to the only thing in this life that is true: the gospel. I have my own sin. I myself am in need of a savior; of His grace. It is ungrace to deny His power and saving grace in my own life. For me to not love other people would be an affront to the One who gave His life for me.  Lord! Help me to love like Jesus loves!

In my grief, I wonder: could it be that these attacks toward anyone who dares to hold to the authority of Scripture betray a deep longing for grace? I believe many who post such things live just beneath a thinly veiled search for grace, a desperate longing to be truly loved. We were created by God and for God … and love is here. Love won at the cross.

Because of the cross, grace is here. The message of the cross is grace; and in the same way I have felt personally wounded, it occurs to me that grace is just that—deeply personal. God’s grace abounds, even now. He rejoices when even one of his lost ones comes home.

Grace baffles those who have never experienced it. The world us the opposite of grace. The world, and unfortunately, the church is known for it’s lack of grace, not for grace. In this context, I understand why one man said I was “just like the Taliban.” He’s never experienced grace.  It’s hard to comprehend why or even how God could extend outstretched arms to us even in our sin. And yet, that’s what He does. He freely offers grace, mercy and forgiveness. He says, “I love you—and you’re wrong.” This is a dichotomy that is almost impossible to comprehend in our world.  Grace, God’s grace, is only free because God has paid the cost.

We cannot stop saying that grace is for everyone anymore than we can stop speaking the truth about sin.

This is the message of the cross: the hope and change this nation is looking for will never be found apart from faith in Jesus. This is where I stand, battle weary and bruised, wearing humbly the criticism that really is aimed at the cross of Jesus Christ. He gave His very life for me. I can do no less than proclaim His love and mercy until He brings me Home.