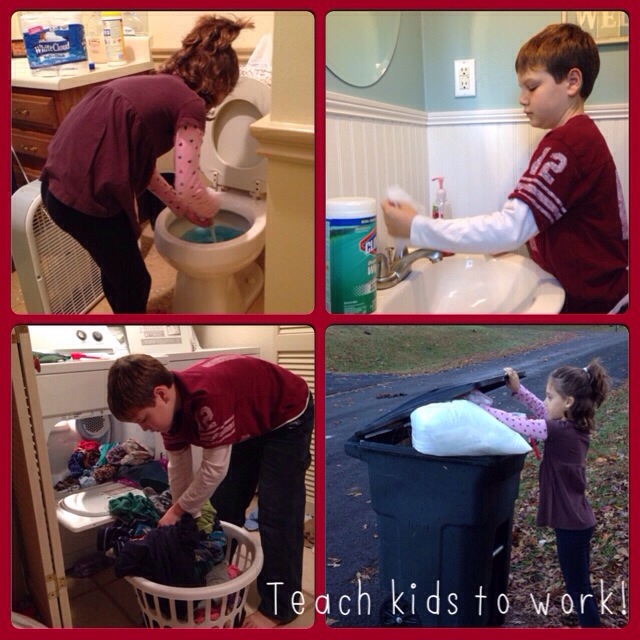 Did you know that mothers expand their work by multiplication and not just addition?

Proverbs has a lot to say about the training of children. In Proverbs 22:6 we read,

“Train up a child in the way he should go, and even when he is old, he will not depart from it.”

This is not a formula or a guarantee for flawless children, rather it is a principal that children keep good habits they learn when they are young.  Every mother’s goal should be to train her children to replace her—and that starts when the children are young.  Start with training your children to help you at home.

A mother’s effectiveness depends on multiplying her efforts around the house.

Recently, I’ve had conversations with new moms who are struggling to get their kids to work around the house. Simple things like chores become battles for control, and Mom’s frustration shows at the end of the day when she decides to do the chore herself.  Hey, I get it! Sometimes it’s easier to clean the kitchen by myself than to train a child to do it while they grumble and complain, or even worse – grumble and complain while doing the chore wrong and then having to be told to do it again. That’s happened just a few times around my house. 😉

One time, I heard someone say that a mom who has her children working around the house is a lazy mom.  I would like to suggest that nothing could be further from the truth! That person had clearly never trained a child to work around the house because it is so much easier to do it yourself, right?  Most of you who have tried to teach children to work know exactly what I’m talking about!

Don’t be afraid be afraid to teach  your children to work.

A wise mom multiplies her efforts through training and teaching her children.  Communicate with your children and train them up, Busy Mom. That’s your job.

15 thoughts on “A Wise Mom Multiplies Her Efforts”