Like many of you, I came to “know” Kirk Cameron in the 80’s, watching the hit sitcom “Growing Pains” — but these days, Kirk is using his influence to strengthen families who are raising their kids in a digital age.

In a social media-centered world, the smart phone has become a cultural rite of passage for kids. But is that rite all wrong?  How can this generation of parents blaze a new trail to equip their kids to thrive in an ever-changing digital environment while steering clear of the dangers that lurk nearby? Join in the conversation and be encouraged as Kirk Cameron and I discuss this very important topic. 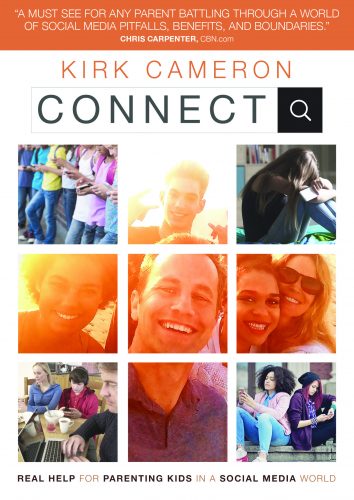 Now available on Digital, On Demand and DVD
Actor & Father of Six Offers Real Help for Parenting Kids in a Social Media World
Nashville, TN – June 5, 2018 – Kirk Cameron, a passionate advocate of marriages and families, has created what may be his most exciting and critical project to date, one that aims to enlighten and encourage parents in today’s digitally driven environment.
In a social media-centered world, the smart phone has become a cultural rite of passage for kids. But is that rite all wrong?

How can this generation of parents blaze a new trail to equip their kids to thrive in an ever-changing digital environment while steering clear of the dangers that lurk nearby?
With six teenagers, Cameron and his wife Chelsea, fully understand this dilemma. So, he went to the experts, and what he learned will enlighten, challenge and equip parents.
In an online world that creates an illusion of reality and “friends” through social media, apps and “followers,” Kirk Cameron: CONNECT pulls back the curtain to the benefits, dangers and boundaries that every parent, teacher, pastor or youth leader should consider while monitoring and utilizing technology in our children’s lives. As Cameron reminds parents, “The heart of the battle is really the battle of the heart.”

“God-fearing parents can find confidence and guidance when it comes to the challenges of parenting in our technology-driven world, knowing that God has fully equipped us for the sacred calling as a parent,” said Cameron. “We have resources to prepare our children as they learn their purpose and identity, and responsibly use technology to understand family, friends, God and the world around them.”

Kirk Cameron: CONNECT, which premiered as a limited theatrical event this past spring, is now available on DVD from CamFam Studios and Provident Films

Kirk Cameron is best known for his memorable role of “Mike Seaver”, a cultural icon of the
80’s, with his mullet hairstyle, cool glasses, and wisecracking comebacks on ABC’s “Growing Pains.”  Since then, he’s appeared in numerous television and movie productions, including the Left
Behind series, Monumental, and Fireproof—the marriage-centered film that became the #1 grossing inspirational film of the year.
He’s been featured on Good Morning America, The Today Show, Dr. Oz, Nightline, Fox News, and CNN and currently travels the country speaking on his brand new marriage and parenting tour, Living Room Reset that offers a night of worship, teaching, and heartfelt conversation about what matters most to husbands, wives, and parents.

Kirk has hosted the live Fathom theater event including Revive Us and Revive Us 2—both
“national family meetings” urging people of faith to return to biblical principles and to create a hope-filled future for our children. His documentary, Kirk Cameron: CONNECT, addresses the critical topic of social media, technology and the impact in the lives of children. He and his wife Chelsea have been happily married for more than 25 years and have six children. Together they host Camp Firefly, an all-expenses-paid summer camp for terminally ill children and their
families.