The world is on fire.  Our children are being sacrificed on the altar of tolerance.

According to WHO, every year in the world there are an estimated 40-50 million abortions. This corresponds to approximately 125,000 abortions per day. In the USA, where nearly half of pregnancies are unintended and four in 10 of these are terminated by abortion, there are over 3,000 abortions per day.  The rights of the baby, who has no voice are sacrificed for the rights of the mom.  Who decided that the mom’s voice was more valuable than the baby’s?

One out of 4 girls and 1 out of 6 boys will be sexually abused before they reach the age of 18 (a.).  Many more go unreported.

Our school systems are failing.  Our kids are missing out on the joy of just being kids.  Play is a human right for children (b.)  Being able to ride their bikes, run, pretend, explore the real world around them, and not be hurried gives them a chance to learn in ways that work for them, which, in turn, helps them grow into healthy adults.

We are not the first culture to wage a war on children. For thousands of years, the children are the ones who seem to pay the price for each civilization’s foolishness.  They were the ones being sacrificed (literally) to the “gods” on the altar in cultures past.  They seem to be the first to be attacked and as developed as our country is, we are still not protecting our children the way we should.  We are sacrificing them on the altar of tolerance. 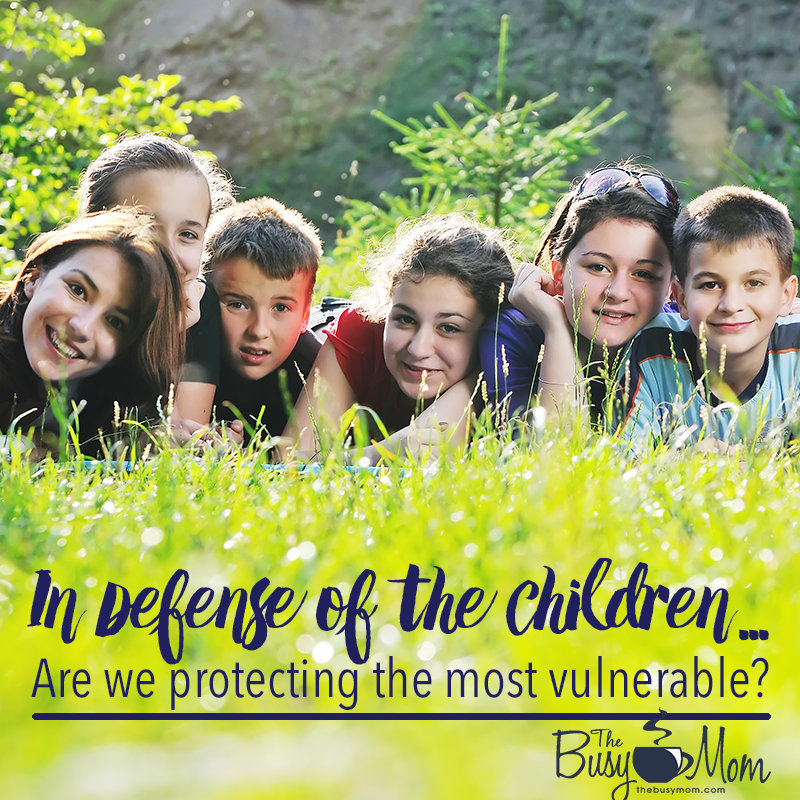 Children are vulnerable.  They are depending on us to protect them and as a population, we are failing them miserably.

Here’s the thing:  children are NOT adults.  That means they are not ready for many “adult” situations.  Our culture is pushing them out in front of a moving bus all in the name of “progress.”

God has a very different view of children than the world does.  He clearly loves children.  He calls them a blessing.  He says they are of great value.

“People were bringing little children to Jesus for him to place his hands on them, but the disciples rebuked them. When Jesus saw this, he was indignant. He said to them, “Let the little children come to me, and do not hinder them, for the kingdom of God belongs to such as these. Truly I tell you, anyone who will not receive the kingdom of God like a little child will never enter it.” And he took the children in his arms, placed his hands on them and blessed them.”

“Religion that God our Father accepts as pure and faultless is this: to look after orphans and widows in their distress and to keep oneself from being polluted by the world.”

We are in a battle of epic proportions. If our children are led astray by sin and wrong thinking,  future generation will suffer greatly for it.

This battle we are facing is a spiritual one.  It can’t be fought with earthly weapons. (2 Corin. 10:4) The enemy of our souls comes to kill, steal and destroy our children and us, but Jesus said that we can have life and have it more abundantly.  Jesus conquered sin and death through his death and resurrection and the victory is ours.

When the final curtain is drawn, will we have been found faithful to have protected the most vulnerable?  Will we have done everything in our power to be their advocates, to defend the defenseless?

I encourage you to take some time to think and pray about what that looks like for you.

As a mom, I never, ever want to be found sacrificing what I know is best for my children in order to please the culture.  We need to be warriors in defense of the children…our children and the others that God places in our lives.  We have an opportunity to invest into the next generation.  Let’s do it and do it well because they are worth it!