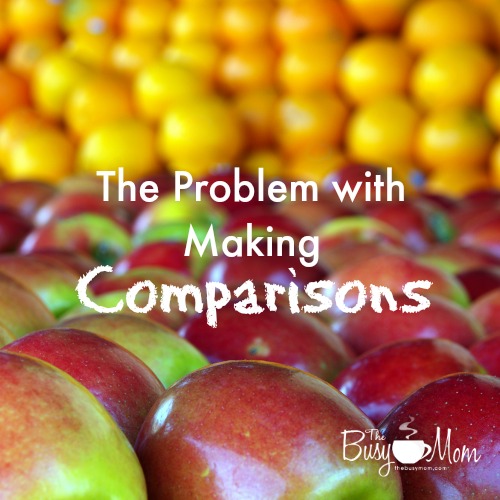 I have a problem with making comparisons. Sometimes making comparisons can be a good thing, like when one is comparing prices when shopping in order to get the best deal. There are other times when it’s a very bad thing! For example, it’s a bad idea to compare your husband or children to someone else’s. That does not usually turn out well! In those situations, comparisons simply serve to make us feel “less than” someone else, feel sorry for ourselves, and make us look at our circumstances and choose to be unhappy.

I was talking with another mom recently, and she shared that her husband was very unhappy with their teenage daughter. The daughter is very bright, but she just doesn’t apply herself to her school work. She’s also not very motivated when it comes to helping around the house or in the yard. She’s a talented musician, a very creative writer, and a sweet girl who is always polite and kind to others, yet her father isn’t happy with her because he sees other young women her age who make straight A’s and help in the house or yard without being asked. Instead of being thankful for his daughter and the gifts and talents she possesses, he sees what she doesn’t possess.

As I was listening to this mom tell me about her sadness because her husband is so displeased with their daughter, I realized that I often do the same thing! Instead of being thankful for my children and their own unique personalities and talents, I often find myself wishing they were different in one way or another.

For example, my 18-year-old son does not enjoy his school work and really isn’t terribly motivated to make good grades (except that, because we homeschool, he has to redo assignments until I’m satisfied with his work). Over the years, I’ve wished many times that he would do his school work cheerfully and that he might even be able to enjoy it to some degree. Guess what? He’ll graduate from our homeschool next year, and he still doesn’t enjoy doing school. And he still doesn’t really care a whole lot about making good grades—except to keep from doing assignments over again.

But I’ve begun to realize that, although school may never be something he enjoys, I can be proud of him for the other talents he possesses. For example, he’s extremely smart and creative. From the time he was a little guy, about 2 or 3 years old, he could tell you nearly anything you wanted to know about any dinosaur that ever existed. And he could take blocks or Legos and create quite a complicated habitat for his toy dinosaurs.

As he’s gotten older, he’s branched out into building wonderful Lego ships and elaborate space stations. He’s also quite talented at strategy games (both board games and video games). So, while I admit that I would have loved to see him take pride in his school work and be motivated to make good grades, he is definitely talented in other areas and in other ways, and I’m thankful for that.

Isn’t it a good thing God doesn’t decide how much He loves us based on our achievements and talents or any other criteria? He loves my children and me simply because He made each of us! Wouldn’t it be wonderful if we were that way? If we could (or would) simply stop worrying about what our children (or we ourselves) don’t have and be thankful for what we do have? If we would stop comparing our husbands or children or houses or cars to others and be grateful instead?

God loves each one of us unconditionally! He loves each one of us simply because He made us! If we never make good grades or go to college. If we never have a job with a fancy title or earn a degree with lots of letters behind it. If we never bring thousands of people to salvation. If we are simply His children living quiet lives of service to Him, that’s enough. If we’re never well-known. If we never make a lot of money. If we simply remain faithful to our husbands and take care of our children and teach them to love Him, it’s enough.

One thought on “Confession: I Have a Comparison Problem”