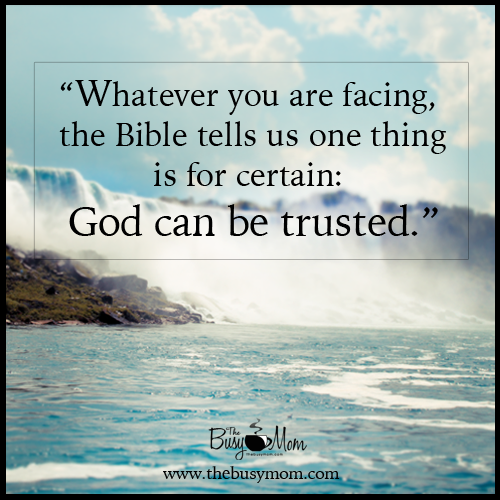 Today I am in the book of Genesis, so if you have your Bible with you, go ahead and take it out and get your highlighter or your ball-point pen (or whatever makes you happy when you sit down with your Bible) and get ready to mark it up a bit. Today, I want to talk about the faithfulness of God and how trust worthy God is.

I’m not going to read the whole passage, but I want to encourage you to read all of it on your own, and that Scripture is Genesis 22:1-19. This is the story of Abraham and Isaac. Some of you might not be familiar with this story so I am going to give you some background on it. Basically, Abraham has been asked by God to lay down his son on the altar and to sacrifice him. It is an incredible story of God testing Abraham’s faith.

“So Abraham called the name of that place, “The Lord will provide”; as it is said to this day, “On the mount of the Lord it shall be provided.”

Now, this is the end of the story, where God clearly provides a sacrifice for Abraham and Isaac was not a required sacrifice. But, here is a tremendous lesson we learn about the relationship God had with Abraham, because God is the same as today than He was all those hundreds of years ago.

As part of that agreement, God changed Abram’s name to Abraham. God often changed people’s name in the Bible to signify a new beginning; Jacob became Israel, for example, and Jesus changed Simon’s name to Peter. So, Abram became Abraham and now, we see, he has a son named Isaac. Abraham was like any father, he loved his son very much and Isaac meant more to Abraham than anything on earth, except for Abraham’s love for God.

One day, God told Abraham to take his son Isaac to a particular mountain and offer him up as a sacrifice. I can’t even imagine what it was like; it’s always gut-wrenching to even think that God would ask Abraham to do this! It’s a good example of our inability to understand God’s ways.  God asked Abraham to do this and, of course, Abraham was upset and afraid, but the Bible says he obeyed and he trusted God.

Can you imagine trusting God that way? He gathered two of his servants, a donkey, some wood to build a fire, and he set off with his son Isaac. After several days, they arrived at the mountain and Abraham and Isaac went alone the rest of the way. Isaac carried the wood and Abraham only took his knife and a flint to light the fire. Suddenly, Isaac looked around and realized they had no lamb for their offering and he asked his father where they might find a sheep. But, Abraham answered saying, “God will provide a lamb for us.” And they continued on their way.

Now, just for a few seconds, try to put yourself in Abraham’s position. Abraham loved the Lord, he knew that God had been faithful to him in the past and God had demonstrated His power and His sovereignty in Abraham’s life over and over again. And now, He was asking Abraham to make the ultimate sacrifice.

Let’s continue with our story…

At last they had arrived at the place that they were instructed to go and Abraham began stacking the wood to make a fire. Now, all this time, Abraham knew God had asked him to sacrifice his son. Could you imagine how sad he would’ve been as he walked for three days toward the mountain? What do you think was going through Abraham’s head? He must have believed his own words and I’m sure he was praying as he walked with his beloved son towards their destination.

This story illustrates how hard it can be to trust and obey God—but it’s also a wonderful example to us of following God through difficult circumstances. Abraham trusted and loved God.  He knew God’s heart toward him and his son was good. In the end, Abraham was going to obey the Lord, no matter how hard it was.

When Abraham and his son reached the place they were going, Abraham had Isaac lie down on the wood on the altar. The time of the sacrifice had come—and still God had not supplied a lamb, so Abraham obediently took out his knife (could you imagine this?) and prepared to sacrifice his son. To Abraham’s relief, at the last moment, God finally spoke and told Abraham not to harm Isaac. He then provided a ram for a sacrifice.

Could you imagine how relieved and thankful Abraham was at that moment? He had trusted and obeyed and the Lord did not let him down. God came through for Abraham at the last moment, and because Abraham obeyed, God reaffirmed the covenant with him.  Today, God’s promise remains in effect; Abraham has many, many descendants.

We see this kind of faith throughout Scripture, but never more poignantly than in the story of God’s own son, Jesus.  Just as God would someday offer His only son Jesus as a sacrifice for our sins, so was Abraham willing to offer his son as a sacrifice.

Whatever He is asking you to do, the Bible tells us that one thing is for certain: God can be trusted.

You can trust the Lord today, busy mom. Take your burdens to Him, let Him guide and direct you, and then believe that He will come through for you. God is rarely early, but He is never late.

3 thoughts on “Rarely Early, Never Late: God Can be Trusted”