Given the disturbing and heartbreaking recent videos which expose Planned Parenthood for the evil that it is committing, I urge you to contact your state representative and ask them to join the movement to defund this murderous organization. In the United States, a half a billion tax dollars go to fund this genocide each year.

We must speak for those who cannot speak for themselves. Sign the petition to remove your tax dollars from supporting Planned Parenthood here.

“Silence in the face of evil is itself evil: God will not hold us guiltless. Not to speak is to speak. Not to act is to act.”
—Dietrich Bonhoeffer

September 2012
This may not be a very popular post, but I feel the need to write about this as I am hearing so many Christians are unwilling to stand for life.  It breaks my heart, and I KNOW it breaks God’s heart.

A gal emailed me today about the abortion thread on my wall. The familiar argument of the church being passionate about the unborn but failing to care for the BORN is a poor excuse for murder.

You know, I have heard this argument before and honestly it rings very hollow to me, because for as imperfect as the church is, it does a good job of reaching out to the “already born”. There are gazillions of programs available through the church and other Christian ministries that reach everyone from the homeless to the prostitute to drug addicted … every.single.day. We DO stand up for the already born. Many Christians would take a child that is not their own… I can think of many off the top of my head and I bet you could, too.

Update: Below is the third video released that shows the horror that is happening to unborn Americans.

The only reason we kill our unborn is because we are selfish. We kill the unborn because they cannot speak for themselves. It’s easier to make the baby “go away” in the culture we live in than it is to bring it into the world and give it up for adoption. What’s REALLY sad about that is that this society does not look down on unwed mothers like it used to and we still persist in killing our unborn!

We have the most pro-abortion president in American history right now … one that would allow me to partially give birth to my child before killing it. As a Christian, I cannot stand by in silence when God has made it ABUNDANTLY clear how He feels on the issue of life.

Even in the case of rape/incest, how does KILLING one of the innocent party make anything better? Surely we would not kill a living mother in favor of her unborn child .. and why? Because we can SEE, HEAR, and FEEL the mother. It makes it harder to murder someone once they’re born. Surely we would cry out in defense of an innocent being murdered on the streets in front of our eyes! How “sterile” we have made the whole process of abortion, right down to washing our hands of the whole messy discussion. Christians! Stand for righteousness! Do not be afraid!

I’m reading Deitrich Bonhoeffer right now — the evil that he witnessed is not much unlike the evil we are allowing right now in this nation. We will be judged for turning a blind eye to the murder of innocent. Like Noah, I want to be found righteous in God’s eyes. No matter what the culture says, we know the truth. We will be held accountable. 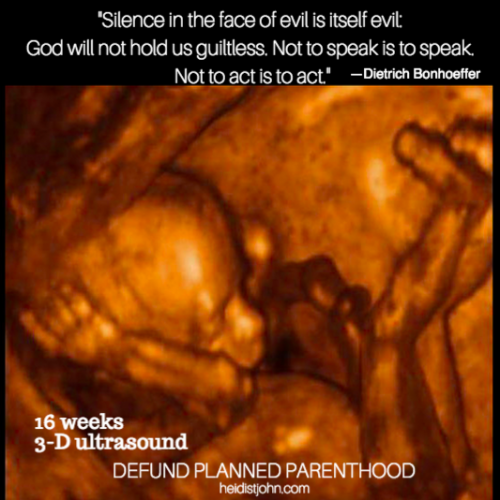 76 thoughts on “Can There Be “Pro-Choice” Christians?”