I grew up in pain. I know it when I see it—and I saw it tonight.Tonight, I sat in a movie theater full of strangers…

Posted by The Busy Mom on Sunday, 6 September 2015

As you can see from reading comments on the post,  I took a lot of heat for my comments about Kim Davis. I get the impression some of my readers think I am against Kim Davis. Quite the contrary. I’m praying for her. She has gone to jail without bail for her stand in disobeying a court order. That takes courage. I applaud her courage.

But as I think back on other men and women in the Bible, like Joseph, Esther and Daniel—I see that they who gained favor from pagan kings through their exemplary service—not from disregarding the law of the land.

I believe SCOTUS was unlawful, even renegade, for creating a law and bypassing Congress. Three branches of gov’t have now become slaves to the judiciary branch. This was never what our founding fathers intended.

However. Daniel only disobeyed the King when he was told he could no longer worship God (thou shall have no other gods before me). Esther stood up against the murder of her people (thou shall not kill) and Joseph ran from the boss’s wife, who would have happily committed adultery with him. (you shall not commit adultery) 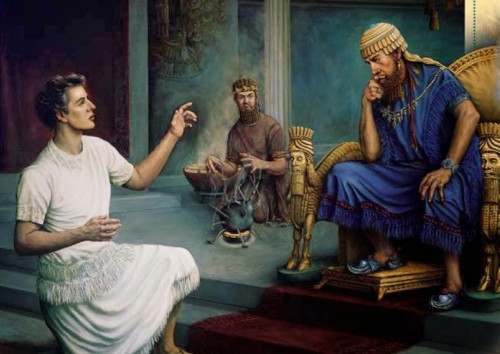 I see these people willing to die (Esther and Daniel) and being willing to go to jail rather than commit adultery (Joseph). I believe it’s worth going to jail to stop the slaughter of the innocent. I will vote according to my conscience every time. I’ll speak the truth in the public square. I will not be a party to murder. I will not cower in fear—because I serve the Captain of Army of the Lord of Hosts! He has not given His people a spirit of fear. (2 Tim 1:7)

But when the dust settles over our dry and thirsty land, I want people to see Christ in my life. Right now, what do unbelievers see? They see woman breaking the law (albeit an immoral law) that they do not believe to be immoral. As far as I can tell, she’s stoking the fire, not squelching it.

Brothers and sisters in Christ—this may be hard to hear, but we do not live in a Christian nation. We live in Babylon. Our President, our Congress, our Judges, do not serve the living God. I live as a Christian woman in the midst of a secular government. The laws in my native country, the USA,  reflect this reality, from abortion to gay marriage. Christians have become the minority in this nation because we have not lived the way God would have us live. We have not obeyed God in our private lives.

We are not unlike the Israelites, who danced as close to the edge as they could and then begged God for mercy when they were led away into captivity.

We live in a nation that has gone from condemning sin, to quietly condoning it to celebrating it. Sadly, the Christian community has been part of it. Like Lot, I pray that God’s judgment would be spared because of the millions of Americans who do love and follow God’s Word—but today, even pastors are unbuckling the belt of truth and laying it down on the altar of mercy. We value being accepted by men above God in many areas of “Christian” life—but I wonder if we have forgotten that we cannot expect the world to understand the ways of God.

We’re trying, but we’re cherry picking what we want to “enforce” with this secular culture. For example, did Kim Davis ever sign a marriage license for two people where one was a Christian and the other was not? That was wrong, too, by God’s definition. She should have refused to condone those marriages, too, right?

We don’t get to pick and choose which parts of the Bible we’ll stand on. We are to live, and love, by the whole thing.

Several have said Noah was like Kim Davis. How? Because he was mocked too? Noah broke no law. He listened to and obeyed God when God told him to do something that seemed absurd. Now, maybe that’s what Kim Davis is doing. But something in my spirit is troubled by her actions. I do not believe it’s winning anyone to Christ.

In the end, only faith in Christ and obedience to His Word will affect the way this nation has embraced and even now celebrates what God clearly calls sin: homosexuality. But honestly, we have to obey every part of God’s Word, not just the ones that are in our faces. Tax evasion, adultery, indifference to the suffering of orphans and the unborn… we have a lot to atone for, and it must begin with Christians on their faces in repentance.

What, men and women, what is the best way to follow God in a country that is not godly? These are the days of Joseph. The days of Daniel. If your job violates your conscience, then quit. Do what Joseph did and serve the Lord with integrity in your place of employment—and if that employer asks you to be complicit in his sin—RUN.

If and when the government tells you it is unlawful to worship God, worship Him anyway. Live in such a way that even ungodly courts cannot find fault with you because you serve the Lord.

Let everything you do speak to the love and mercy and forgiveness of God.

Be we, the children of God, trust in the name of the LORD. Our whole lives, not just part of them, need to speak of his love.

We need to show our own need for Jesus. To be Christians in the midst of a broken generation will take repentance and mercy.

To be a Christian in the midst is to stand alone if necessary—but I pray we will stand together on the things that really matter. We will not be effective until we fall on our knees and admit that there is none righteous, no, not one. May our hearts break for what breaks His.

When the dust settles from this latest us versus them battle, I wonder: will people see Jesus? If not, our stand is for nothing. 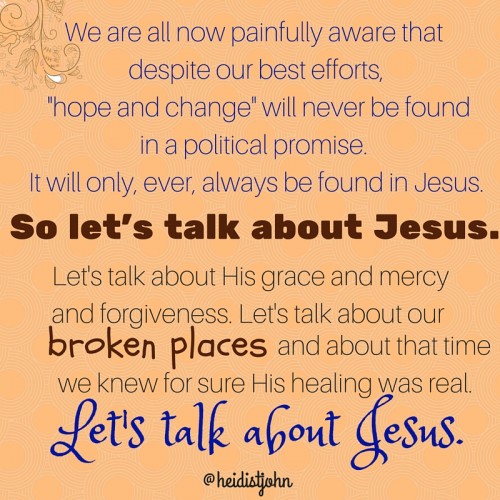 19 thoughts on “When the Kim Davis Dust Settles, Will People See Jesus?”