The times, they are a-changing. Every day, it seems a new surprise announcement surfaces for the American public to try and absorb, everything from political shenanigans to gender-bending news—and mandates and edicts ‘n stuff. Seems we can’t catch a break from the new social order that is rapidly being constructed around us—you know… the one our children and grandchildren are going to grow up in.

And it’s wrong, too. It’s just plain wrong. Can I say that? It’s been a few weeks and I’m still shaking my head at the fact that we now have to defend the once commonly held notion that women’s restrooms are for, well—women.

It’s a conversation that we never imagined we would be having. First it was stores, and now, predictably, it’s coming to schools.

In the interest of transparency, I’ll confess: I never really liked Target calling their customers “guests.” The term implies that the store is not really a store. A+ marketing job, Target. They know people. When you’re a guest, you feel at home, right? The term has a warm fuzzy feel about it. It invites you to let down your defenses. As a “guest” in Target, you feel safe and valued while you spend your hard-earned dollars on everything from cucumbers to calculators.

It’s part of (or it used to be) Target’s appeal, isn’t it? We’re not just customers to Target, we’re their “guests.”

Listen. Target loves you. They have your comfort and safety in mind. They do! In fact, they want all their “guests” to be comfortable in their own skin. That’s why they’re allowing any grown man who “feels” like a woman to follow your 10 yr old right into their bathrooms. That guy has feelings! Don’t you care? Come one! Have a heart!

A Target supporter told me via Facebook the other day that I need to stop worrying about it. She suggested I “learn to be the parent” and simply accompany my girls into the restrooms, past the guys, you know … and just deal with it. A good mom would never let her kids go to the bathrooms alone anyway, right? Right! But that’s not the point, and most consumers know it. Target stock is continuing to plummet in the wake of their decision.

So here’s the question: Is this really Target’s best attempt at making their “guests” feel safe and loved and valued and protected and understood and comfortable?

Absolutely not. If it was about making transgendered customers feel safe, they would have spent the money to put in more family restrooms.

Make no mistake: Target’s eyeing a much bigger target. 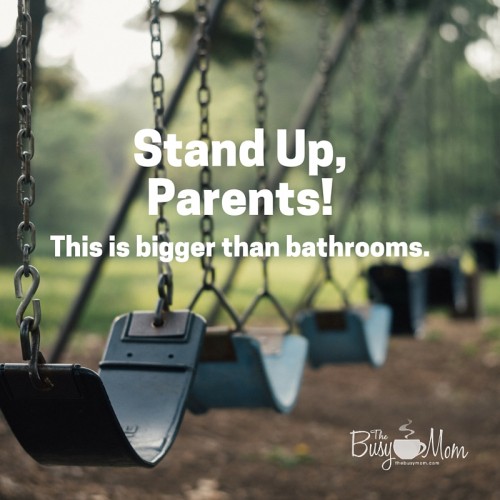 Target doesn’t care that this puts women and children at risk in the most vulnerable of scenarios. This is not about accommodating the transgendered community. It’s about forcing anyone who senses there is something inherently wrong with men pretending to be women to “get over it…” and if they have to sacrifice yours or your daughter’s or your wife’s safety in order to make their point, they’ll do it.

This is so NOT about bathrooms. It’s about social engineering. It’s about a large corporation saying they know better than the people who are so fortunate as to be seen as guests in their stores.

And, it’s another nail in the coffin of what God says family was created to look like: marriage between a man and a woman; a father and a mother raising children. We are, by design, male and female. The LGBT movement you are seeing in the culture today has one aim: to further destroy “binary” of male and female, and ultimately, change the culture forever. As the family goes, so goes the culture.

The public schools are another matter entirely. Most of you know we have homeschool our kids—and after the king’s edict last week, you could not pay me to put our kids back into a government school. Target is one thing. I’ll vote on that one with my wallet. But our kids—our kids! Mr. President. You would pull funding from American schools to make a political point? Really?

Yes. He would. Why? Because this is not about bathrooms. It’s bigger than that. It’s about ushering in a new era where those who believe in the traditional male/female “binary” are shunned and marginalized.

There comes a time when ordinary people need to stand up against dangerous ideologies. I hope you won’t let fear keep you from protecting your children, wives and daughters. It’s okay to be angry. It’s okay to say NOT ON MY WATCH. It’s okay to tell President Obama that you don’t want to participate in his social agenda. We’ve got kids to protect. I expect to see a huge surge in the number of parents choosing to homeschool because of actions like this. If you’re thinking of homeschooling, take it from a mom of seven who has been doing it nearly twenty years. You can do it. If you’re on the fence about homeschooling, now is a good time to take the plunge.

Here are five things I wish I’d known before I started homeschooling.

Oh, and Target, I don’t want to be your guest again—so you can take your comfy-cozy, calibrated collaboration with the left and keep it. 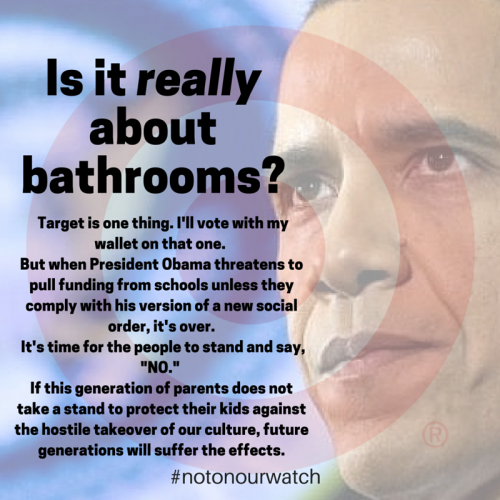 Join the boycott against Target HERE