A few weeks ago, I had the privilege of sitting next to a black college professor on a flight from Portland, Oregon to Chicago. I had a lot of work to do on that flight—my guess is that he did, too—but we struck up a conversation within a few minutes of boarding our flight.

At 5:30 a.m. most people are not terribly talkative, but he had his coffee and I had my ice water, so we were well-positioned to at least stay awake and carry on a conversation that morning.

I’ve met dozens of fascinating people on planes. I think more than a few folks have come away scratching their heads at meeting me, too. I’ve been told that “I don’t look like a homeschool mom.” It’s always funny how people react to me when they hear I’ve been married for 25 years and have seven children and a grandson. I’ll admit, I enjoy countering the stereotype whenever I can. Hey, having seven kids is challenging. At some point, it’s got to be funny!

I don’t know what this gentleman thought when he first met me that day, but I’m glad it didn’t keep him from talking to me. These are fearful times. News from Ferguson fuels racial tensions. ISIS fuels fear of terrorism and news outlets, who run off fear, bring it into our homes and communities every day. We’re afraid to even give an opinion anymore, because heaven only knows what will come at us if we do. I’m glad fear didn’t keep us from asking questions that day. We’ve got important issues to talk about in this country.

People say we can’t talk to each other in this political climate, but you might be surprised at the topics we ventured into that morning. Our quiet conversation included many things that people can’t seem to talk civilly about in this world anymore. We talked about gay marriage and abortion. We talked about race and the implications that the last election just had for our country. We even broached the subject of *gasp* music styles in church.  (You have to be a music person from church to get how loaded that one was.)

I learned several things as we talked. This gentleman and I come from vastly different viewpoints. I’d venture to say we don’t believe the same core things on many levels—but it occurred to me as we were talking that we were doing what most people won’t do today: we were listening to each other.

It’s always fascinating to listen to another person’s story. Especially when you’re listening to truly understand the story. Do you know what I see in Ferguson? No one’s really listening. 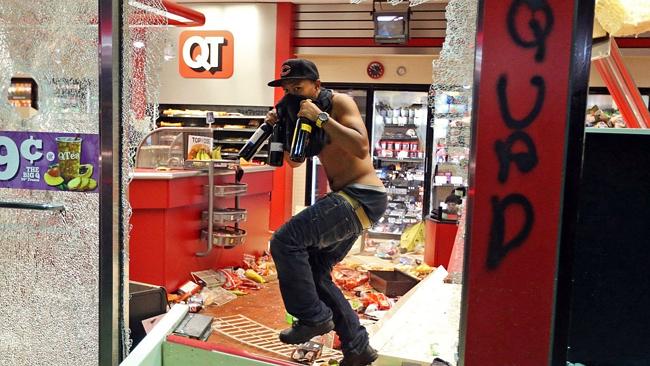 What’s happening in Ferguson is a national tragedy for sure, but it’s also a symptom of a much bigger problem. Our problem is not President Obama (although I would say he’s not helping.) Our problem is not the economy or the unemployment rate. It’s got nothing to do with things being “fair” or with the race of the our elected officials.

Our problem in this nation is a spiritual one. We’ve got a spiritual problem that’s so profound, we can’t even talk about it without screaming at each other.  We yell and scream about being right but we don’t have any basis for what “right” is. We’ve lost our moral compass.

Our nation is suffocating from lack of spiritual oxygen. We’re clawing at each other in an effort to get to some fresh air, but it’s not working. We’re trying to address a spiritual problem with emotional solutions, but unless we address our spiritual problem first, we will never find the answers we need. We’ve got to do more than just stir the pot. We’ve got to start over again. The recipe is no good. 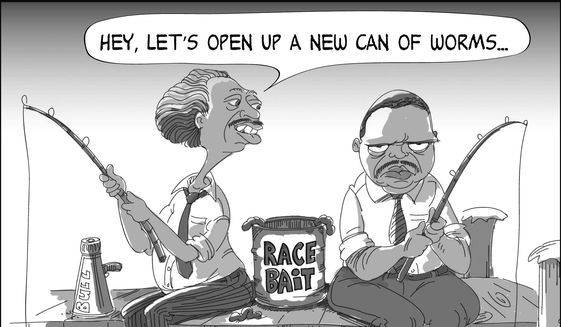 I wish more people of faith would share their faith in a way that did justice to the message of the gospel.

Why? Because Faith matters. The Bible is relevant to the issues we face today. What we believe about God matters because our belief in God (or our lack of belief) determines the way we view, and ultimately treat other people.  This idea that what we believe about God doesn’t have lasting consequences is hogwash. If we believe we are no more than a random accident or an evolved “animal,” then we have every reason to act like animals. And that’s what we’re doing.

I get why many Christians have gone “underground” with their faith. It seems to be open season on Christians in the United States right now, and unforuntately, I think we’ve asked for it in many ways. We’ve done a terrible job of communicating the message of hope that’s found in the gospel. We seem to have forgotten how to put our faith into action and how to speak the truth in love—but that doesn’t make the truth of the Bible any less… true.

Christians are losing the culture war because we don’t know why we believe what we believe and we can’t defend it in a way that communicates the love that God has for people.  We must stop making emotional arguments for spiritual problems. The problem in Ferguson is the same problem we are having world-wide. It’s a sin problem. 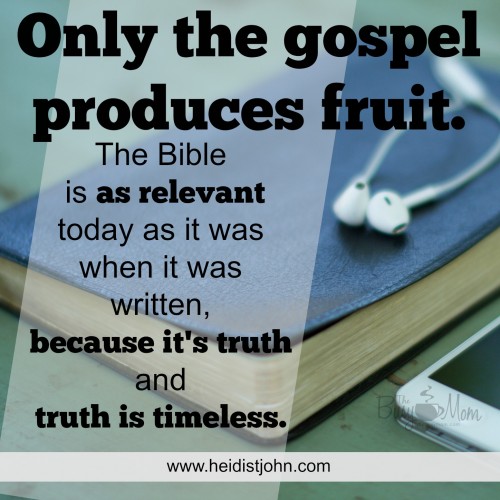 If we can’t call it what it is, it will never get any better. If we continue talking about it as if it were based on income levels and not in spiritual darkeness we’re in trouble. We’ve got to seek the Lord for answers. I think it’s clear by now that left to our own devices, we’re gonna mess things up every.single.time.

So what can we do? First, we need to repent of our own sin.

Next, if we claim to be messengers of the gospel, we need to do what Jesus would have done:
Preach the gospel—and if necessary, use words.

Only the gospel produces fruit.  Love was God’s weapon. He gave His son up for us, while we were still sinning against Him. He yielded His right to “be right” so that we would know Him and His love.  (Romans 5:8) 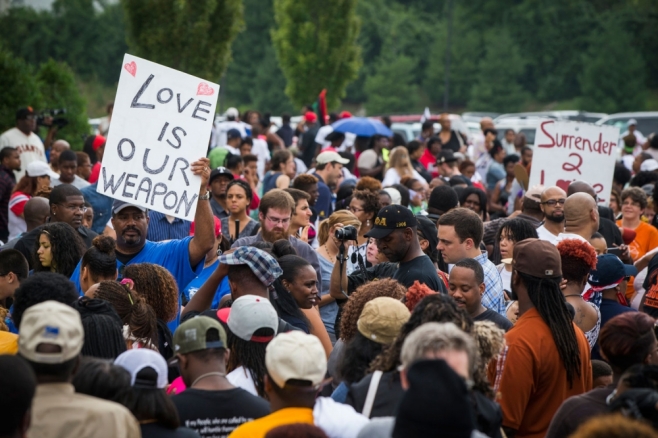 Do you have faith enough for Ferguson? If you do, then live it out.  God’s Word is as relevant today as it was when it was written, because it’s truth, and truth is timeless.

It’s time we started to have an honest conversation about the root of the problem. Our families and communities are never going to be helped by a really great president or by any political figure. We have an entire nation desperate for “hope and change” right now… but hope and change will never be found apart from the gospel of Jesus.

That’s what we need to start saying.

As Christians, we must have faith enough to live out the gospel.  Not just for Ferguson, but for the rest of the world.